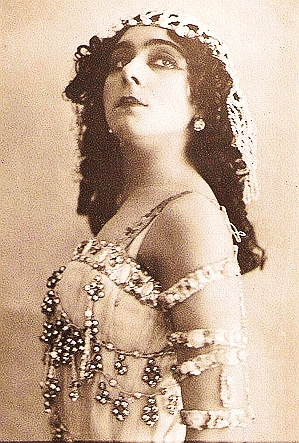 Vera Karalli was a Russian silent film actress and ballerina of Bolshoi Theatre and the “Ballets Russes” (Russian Ballet) led by Sergei Diaghilev. She was born Vera Alekseevna Karalli on July 27, 1889, in Moscow, Russia. In 1906 she graduated as a ballerina from the ballet class of Alexander Gorsky at Moscow Theatre School. From 1906 – 1909 she was member of the troupe at Bolshoi Theatre in Moscow, and made appearances in ballets by Mikhail Fokin and Aleksandr Gorsky. In 1909 Karalli performed in Paris with the “Russian Seasons” and “Ballets Russes” (Russian Ballet) led by impresario Sergei Diaghilev. Then she returned to Russia and was member of the troupe at Bolshoi Theatre in Moscow. During the 1910s, she appeared as a lead dancer in such productions as “Swan Lake” by composer Pyotr Ilyich Tchaikovsky and in “Life for the Tsar” by composer Mikhail Glinka staged at Bolshoi Theatre. In 1914 Vera Karalli made her film debut at the Moscow film studio of Aleksandr Khanzhonkov co-starring as Elena opposite Ivan Mozzhukhin and Pyotr Chardynin in T’en souviens-tu? (1914), by director Pyotr Chardynin. She also co-starred in Voyna i mir (1915), the first adaptation of the Lev Tolstoy’s classic novel “War and Peace” by directors Vladimir Gardin and Yakov Protazanov. Karalli shot to international fame with her role as Gizella, the mute dancer in Umirayushchiy lebed (1917) (aka.. Mad Love) by director Yevgeny Bauer, among her other film works. During the 1910s, Vera Karalli was a mistress of Grand Prince Dmitri Pavlovich Romanov. She was also co-conspirator in the Feliks Yusupov’s plot and murder of Grigory Rasputin in December of 1916. Karalli was present at the Yusupov’s Moika Palace and allegedly she was there to act as a substitute bait for Rasputin, instead of Yusupov’s wife Irina, who was initially shown to the lusty Rasputin as the main bait to lure him into the trap before he was killed. Karalli was chosen for the plot to murder Rasputin, because he knew of her as an actress, she was very pretty and was already a well known film star, who appeared in about twenty silent films in Russia. However, later some of her films were lost or destroyed during the chaos of Communist Revolution and the Russian Civil War of 1917 – 1921. After the Communist Revolution, Vera Karalli emigrated from Russia, and worked in Paris for the Diaghilev’s Ballete Russes. She also taught dance in Kaunas, Lithuania, during the 1920s, and was the ballet mistress for the Bucharest Opera in Romania during the 1930s. Later she taught dance and lived in Austria, and died there on November 16, 1972.