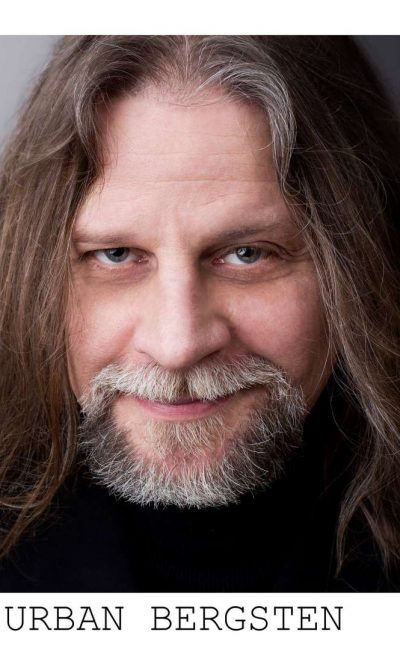 Urban Bergsten was born and raised in Linköping, Sweden, and being interested in performance arts from an early age quickly established himself on stage as both musician and actor while at the same time producing music and movie reviews for local newspapers and TV channels. Studies in acting and writing for stage and screen led Bergsten to form the theatre company Teater Pseudo in 1994 together with two fellow graduates. The company’s strong focus on Swedish Drama led to the production of numerous plays often performed in unconventional environments around Stockholm such as apartments, bars, theaters or even in the open air (where the actors once were joined by a car on stage). Teater Pseudo has also toured all over Sweden. Bergsten featured strongly on Sweden’s burgeoning stand up comedy circuit between 1994-1999 where he teamed up with other promising humorists to form several constantly evolving comedy constellations. These innovative young comedy pioneers came to define Swedish cult channel ZTV and even made a notable impact on bigger networks such as SVT and TV4. At this time Bergsten also managed several comedy venues, and his involvement with improvisational theatre and slam poetry gained him a reputation for constantly producing fresh material. In 2006 Stockholm’s Fryshuset College appointed him lecturer on their Creative Writing Program. Within one year Bergsten had risen to the position of Artistic Director. This appointment coincided with the further emergence of Bergsten as an actor, director and writer within short films, commercials and most recently web-based comedy.