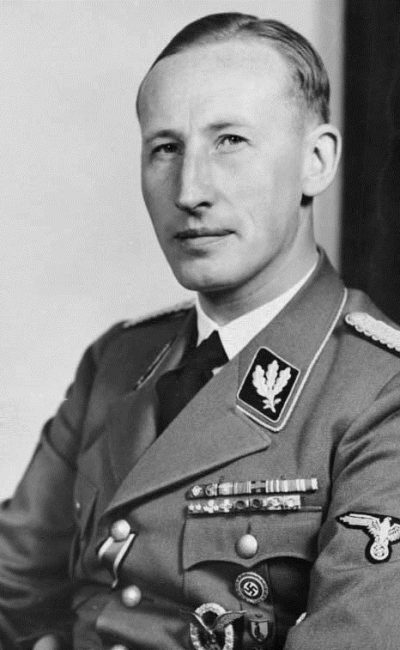 Reinhard Heydrich began his career as an officer in the post-World War I German navy. He was dishonorably discharged after becoming involved in an illicit love affair. The young woman became pregnant, but instead of marrying her, Heydrich met and soon got engaged to Lina von Osten. In 1930 Heydrich, now unemployed, was persuaded by his wife to join Adolf Hitler’s National Socialist (Nazi) party, which he did the next year; he also became a member of the SS at that same time. As one of its first officers, Heydrich was tasked by Heinrich Himmler to expand the small organization into an internal security force to monitor the Nazi party. The result was the creation of the SD (Sicherheistdienst [Security Service]), which was combined, in 1934, with the Gestapo (Gestaatspolizei, or state secret police) to form the much feared SS Security Police, which Heydrich–now an SS Brigadier General–commanded. He played a major role in the destruction of the SA, known as the “storm troopers”, which was an internal security service set up by Hitler but which he now suspected of plotting against him; the organization was destroyed and many of its officers, including its leader, Ernst Röhm, were murdered in June of 1934. For his services Heydrich was made a Lieutenant-General in the SS. At the start of World War II Heydrich became commander of the consolidated Reich security forces, which he formed into the Reich Security Central Office of the SS. Also, by this time, Heydrich had become a major figure in the rounding up and planned extermination of Europe’s Jews. On his orders, the SS-Einsatzgruppen–Special Groups–were created for the purpose of hunting down, rounding up and exterminating Jews in Poland and Russia. Three years later, in 1942, he chaired the infamous Wannsee Conference, where the decision was made to exterminate all the Jews of Europe. Promoted to SS-General (Obergruppenfuhrer), Heydrich was made the Reich Governor of Czechoslovakia at the start of 1942. Aware of how powerful, cunning and dangerous Heydrich was, British intelligence agents put together an operation designed to kill him, and trained and dispatched three Czech exiles to Prague. The assassination was carried out in May of 1942. Heydrich died a short while later, on June 4th, the same day of the historic Battle of Midway in the Pacific. If ever a truly monstrous and evil man existed, it was Reinhard Heydrich, one of the masterminds of the Holocaust. In a horrific act of revenge, called “Operation Reinhard,” Hitler had the entire village of Lidice, Czechoslovakia–near where Heydrich was killed–exterminated. All male inhabitants above the age of 15 were shot; all other residents were sent to concentration camps, and the village itself was physically wiped off the face of the earth. Heydrich was buried with full honors. His grave on the Invalidenfriedhof in Berlin is now anonymous in order to prevent any form of remembrance.