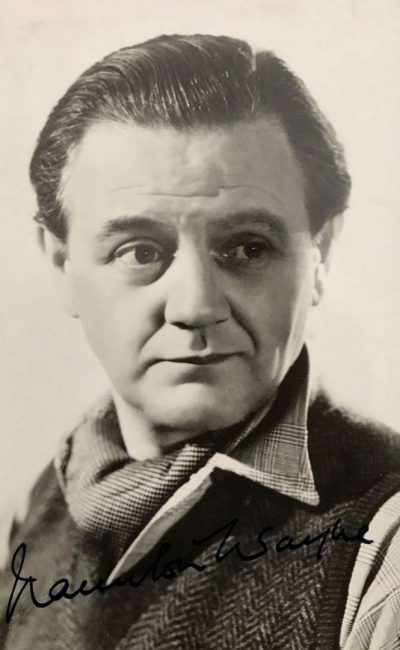 Linked inextricably with actor Basil Radford, Welsh-born character actor Naunton Wayne, together with Radford, struck such a major chord with film audiences as an inept, uppercrust pair of cricket-obsessed British gents, that the two were invariably teamed up time and time again in a host of “veddy” popular film comedies. The perennial partners would prove equally popular on radio. Next to the hearty, mustachioed Radford, the dapper-looking Wayne paled in size and appeared much tweedier in appearance. Born on June 22, 1901, he was educated at Clifton College in Bristol. A comic entertainer in Wales for the first eight years of his career, he arrived in London in 1928 and was utilized as an emcee and quipster in a number of West End stage productions, concert parties, vaudeville shows, cabarets and such night clubs as the Ritz, the Dorchester and Cafe de Paris. He didn’t even consider straight acting roles until 1937. The legendary Alfred Hitchcock ignited the team spark after casting both in his classic mystery A Dama Oculta (1938). As the characters Charters and Caldicott traveling by train through Europe, they nearly stole the show as a pair of cricket twits completely oblivious to the murder and mayhem happening on board, with victims piling up on the corridor floors, nefarious Nazis on the prowl and missing passengers nowhere to be found. Totally irrelevant to the plot, Wayne and Radford provided marvelously droll relief and their instant rapport, expertly written by screenwriters Sidney Gilliat and Frank Launder, did not go unnoticed. The duo showed up again, courtesy of Gilliat and Launder, in director Carol Reed’s Gestapo (1940) — same characters, same setting, same Hitchcockian suspense, same laughs. Radio was a natural diversion as well with Launder and Gilliat writing a serial for their Charters and Caldicott characters which they called “Crooks’ Tour” in 1940. A same-titled film with them as the centerpiece was released the following year. They also popped up together in wartime shorts and co-starred in a second radio serial, “Secret Mission 609,” with their usual bungling somehow foiling another sinsiter Nazi plot. The film Milhões Como Nós (1943) also utilized their popular deadpan characters, and they appeared in cameos together in Alguém Falou… (1942) and the “Golfing Story” segment of the classic thriller Na Solidão da Noite (1945). Launder and Gilliat claimed a copyright on the character names so when Wayne and Radford turned down roles in the writers’ Um Estranho na Escuridão (1946) due to their undernourished parts, Wayne and Radford bid adieu to the characters and returned to radio–together. Their first appearance in “Double Bedlam” spawned a series of comedy-thrillers including “Traveller’s Joy,” “Crime Gentlemen Please,” “That’s My Baby,” “Having a Wonderful Crime” and “May I Have the Treasure.” This led back to their co-starring in films. In the vehicle It’s Not Cricket (1949), in which they appeared as the characters Bright and Early, they played private eyes dogged by yet another Nazi. The climax was set, of course, during a cricket match. They made cameo appearances in two other late 1940s comedies Helter Skelter (1949) and Stop Press Girl (1949). While appearing on their 1952 radio adventure “Rogues’ Gallery,” Radford, age 55, suffer a fatal heart attack. Wayne continued the storyline alone. Wayne appeared rather sparingly thereafter, usually in officious “perfect Englishman” roles. He filmed his final picture playing Lord Whitebait in Nothing Barred (1961). His last role was on the TV series John Browne’s Body (1969). He passed away on November 17, 1970 in Surbiton, Surrey, England.