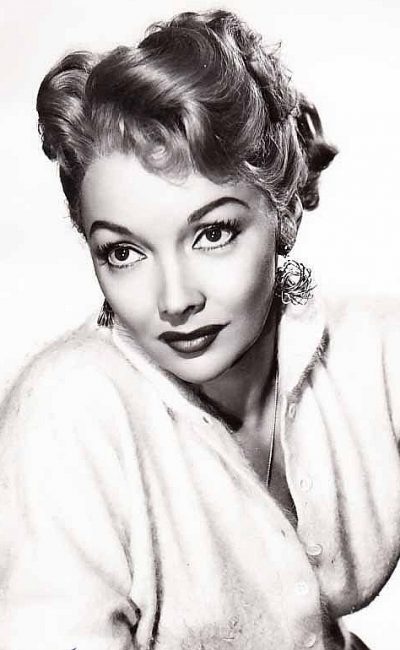 Petite, attractive Mari Blanchard rarely managed to get the lucky breaks. The daughter of an oil tycoon and a psychotherapist, she suffered from severe poliomyelitis from the age of nine, which denied her a hoped-for dancing career. For several years, she worked hard to rehabilitate her limbs from paralysis, swimming and later even performing on the trapeze at Cole Brothers Circus. At the urging of her parents, she then attended the University of Southern California, where she studied international law before dropping out nine units short of a degree. Her university studies did not lead to a career either. Sometime in the late 1940s, she joined the Conover Agency as an advertising model and, at the same time, was promoted by famed cartoonist and writer Al Capp, becoming the inspiration for one of his Li’l Abner characters. As the result of an advertisement on the back page of the Hollywood Reporter, Mari was signed to a contract with Paramount. However, her early experience in the movie business proved an unhappy one, most of her roles being walk-ons and bit parts. Homens do Deserto (1951), for example, limited her to a token stroll down a street, twirling a parasol and smiling seductively at members of the Foreign Legion. It wasn’t until Mari joined Universal that her fortunes improved somewhat, with a co-starring role (opposite Victor Mature) in O Príncipe de Bagdá (1953). After that, it was all downhill again. Burt Lancaster, co-producer and star (with Gary Cooper of the excellent A-grade western Vera Cruz (1954), had requested Mari as his leading lady, but Universal refused her release to United Artists and forbade her to accept the lucrative role (Denise Darcel ended up getting the part). Mari then lost the lead in a much lesser picture,Pacto de Honra (1954), to Shelley Winters. Instead, she was cast as Venusian Queen Allura in one of the least exciting outings by Universal’s leading comic duo, Bud Abbott e Lou Costello no Planeta Marte (1953). Mari did end up with a respectable starring role in the western Antro da Perdição (1954) opposite Audie Murphy. A remake of the classic Atire a Primeira Pedra (1939), she was cast in the Marlene Dietrich part and took great pains to affect a totally different look, darkening her hair so as not to be compared to the great star. Even the name of her character was changed from ‘Frenchy’ to ‘Brandy’. “Destry” was not all smooth sailing. There was tension between her and director George Marshall (who had also directed the original version) and Mari suffered a facial injury as the result of a fight scene. The film was critically well received, but unfortunately Universal failed to renew its contract with Miss Blanchard, and her career then went into free fall. Freelancing for lesser studios, she played a TB victim injected with a serum turning her into a Mr. Hyde-like killer in the lurid Mulher Diabólica (1957) (during filming she nearly died of acute appendicitis). Mari then appeared for Republic in the eminently forgettable Man Mad (1958) before briefly starring in her own short-lived adventure series Klondike (1960). Her last role of note was as the cheerful and likeable town madam in the rollicking John Wayne western comedy Quando um Homem É Homem (1963). Sometime that year, Mari Blanchard developed the cancer which was to claim her life in 1970 at the age of just 47.