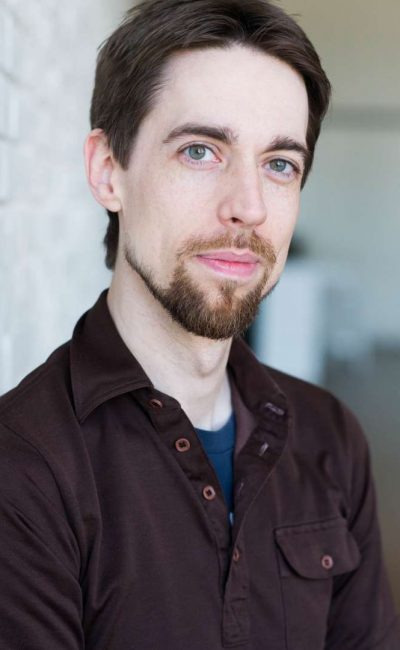 John Orr is a Los Angeles-based character, creature, and voice actor. His film career began in 2006 when he appeared in numerous comedy shorts by Indianapolis production troupe, The Really Really Big Show. He secured a co-starring role in their first feature-length, and the lead in their second. During this time, Orr produced and hosted a series of locally-beloved live-stage variety shows in a multitude of improvised characters, and he also combined acting with music by conceptualizing and co-directing music videos for songs under his moniker The Last Domino, for which he writes, sings, plays multiple instruments, and produces. John moved to Austin, Texas in 2011. He began by involving himself in the burlesque scene, eventually becoming a go-to show host for troupes throughout Texas. Soon thereafter, he signed with Zephyr Talent Agency, and appeared in films, commercials, stage musicals, and performed voiceover work for numerous projects. Around this time, Orr began working with Joseph Gordon-Levitt and HITRECORD for a vast array of projects, including season two of the Emmy-winning “HitRECord On TV”, for which he helped develop the show’s segments by acting, writing, composing music, and performing voiceover narration. Orr has also delved into the world of creature work. In addition to his part as a sasquatch in the 2014 film Bigfoot Wars, John starred as the chicken creature in The Whiskey Shivers (of Pitch Perfect 3 fame)’s “Cluck Ol’ Hen” music video, and in two 2017 horror shorts as Demon and Cronos in We Summoned A Demon and Dead Inside, respectively. Immediately following these projects, John worked on two of the five films chronicled in Robert Rodriguez’s “Rebel Without A Crew” docu-series, and portrayed Scar in a live-action shot-for-shot parody of the Lion King’s “Be Prepared” number, entitled “Free Healthcare”. John Orr now resides in Los Angeles. He has already played creatures in two yet-to-be-released projects, and also featured in commercials for Panera, Playstation, and – most notably – Realtor.com.