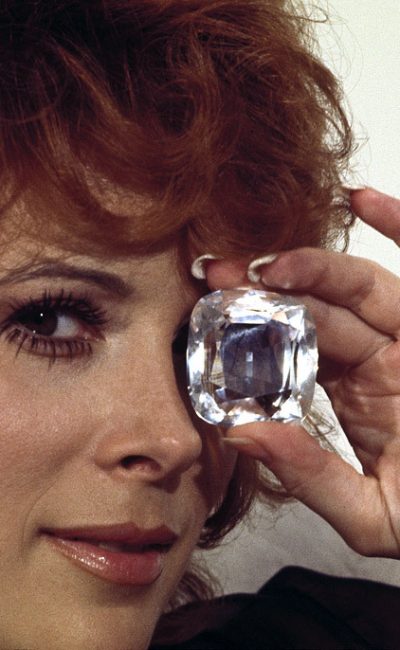 An incredible piece of 1960s eye candy, Jill St. John absolutely smoldered on the big screen, a trendy presence in lightweight comedy, spirited adventure and spy intrigue who appeared alongside some of Hollywood’s most handsome male specimens. Although she was seldom called upon to do much more than frolic in the sun and playfully taunt and tempt as needed, this tangerine-topped stunner managed to do her job very, very well. A remarkably bright woman in real life, she was smart enough to play the Hollywood game to her advantage and did so for nearly two decades before looking elsewhere for fun and contentment. Jill St. John was actually born Jill Oppenheim in 1940 in Los Angeles. On stage and radio from age 5, she was pretty much prodded by a typical stage mother. Making her TV debut in The Christmas Carol (1949), Jill began blossoming and attracting the right kind of attention in her late teens. She signed with Universal Pictures at age 16 and made her film debut as a perky support in Summer Love (1957) starring then-hot John Saxon. Moving ahead, she filled the bill as a slightly dingy love interest in such innocuous fun as The Remarkable Mr. Pennypacker (1959), Holiday for Lovers (1959), Who’s Been Sleeping in My Bed? (1963), Who’s Minding the Store? (1963) and Honeymoon Hotel (1964). Whether the extremely photogenic Jill had talent (and she did!) or not never seemed to be a fundamental issue with casting agents. By the late ’60s she had matured into a classy, ravishing redhead who not only came equipped with a knockout figure but some sly, suggestive one-liners as well that had her male co-stars (and audiences) more than interested. She skillfully traded sexy quips with Anthony Franciosa in the engaging TV pilot to the hit series The Name of the Game (1968) and scored a major coup as the ever-tantalizing Tiffany Case, a ripe and ready Bond girl, in Diamonds Are Forever (1971) opposite Sean Connery’s popular “007” character. She also co-starred with Bob Hope in the dismal Eight on the Lam (1967), but the connection allowed her to be included in a number of the comedian’s NBC specials over the years. A part of Frank Sinatra’s “in” crowd, she worked with him on both Come Blow Your Horn (1963) and Tony Rome (1967). On camera, Jill’s glossy femme fatales had a delightfully brazen, tongue-in-cheek quality to them. Off-camera, she lived the life of a jet-setter and was known for her romantic excursions with such eligibles as Jack Nicholson, David Frost, Bill Hudson, Roman Polanski and even Henry Kissinger. Of her four marriages, which included laundry heir Neil Dubin, the late sportscar racer Lance Reventlow, son of Woolworth heiress Barbara Hutton, and easy-listening crooner Jack Jones, she seems to have found her soulmate in present husband Robert Wagner, whom she married in 1990 after an eight-year courtship. Jill first met Wagner when they were both just beginning their careers as contract players at 20th Century Fox. The couple share credits on several productions, notably Banning (1967) as well as the top-tier TV movies How I Spent My Summer Vacation (1967) and Around the World in 80 Days (1989). Abandoning acting out of boredom, she has returned only on rare occasions. She played against type as a crazed warden in the prison drama The Concrete Jungle (1982) and has had some fun cameos alongside Wagner both on film (The Player (1992)) and even TV (Seinfeld (1989)). In the late 1990s they started touring together in A.R. Gurney’s popular two-person stage reading of “Love Letters.” Jill’s lifelong passion for cooking (her parents were restaurateurs) has turned profitable over the years. She has written a cookbook and appeared as a TV chef and “in-house” cooking expert on Good Morning America (1975). She also served as a food columnist for the USA Weekend newspaper. She was glimpsed more recently in the films The Calling (2002) and The Trip (2002) and she and Wagner had small roles as Santa and Mrs. Claus in the TV movie Northpole (2014). 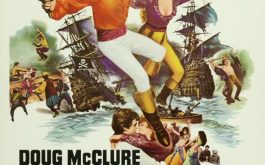