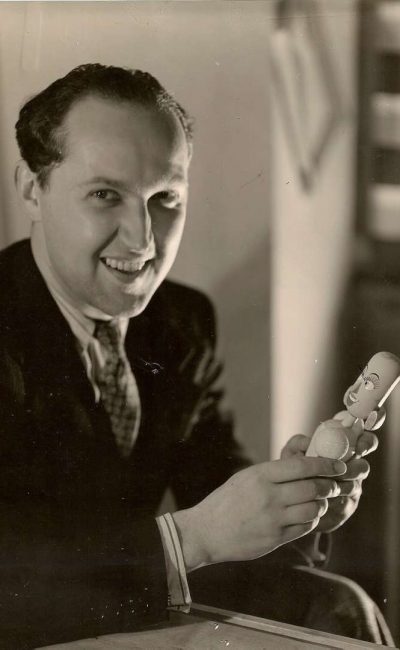 George Pal was born on February 1, 1908, in Cegled, Austria-Hungary. Later, when he was still a child, his stage-entertainer parents divorced, and he was raised by his grandparents. In 1928, Pal graduated from the Budapest Academy of Arts with a degree in Architecture and highly developed drawing skills. There were no opportunities for an Architect when he left the University, so, putting his other talents to work, he found employment at Hunnia Films in Budapest. Later on, through his films, Pal became an architect of worlds, but first… At Hunnia, Pal drew lobby posters and created embellished titles for silent movies. He also quickly learned the craft of motion picture cartooning. In 1930, George married Elisabeth Josepha (Zsoka) Grandjean, with whom he later had two sons, David (born, 1937) and Peter (born, 1941). Seeking work with better pay, the young couple moved to Berlin, a center for film innovation. Pal’s talents were soon noticed. From 1931-1932, Pal worked at UFA Studios in Berlin where he became head of the cartoon department. Then, he set up his own film studio elsewhere in Berlin. His credentials attracted orders from companies for animated advertising. Instead of the cartoon approach, he developed his own take on making inanimate objects move, even dance, using the still evolving art of stop-motion photography. Advertisements featuring, for instance, Overstolz cigarettes, outfitted with faces, arms, and legs, were shown on theater screens strutting and singing as if drawn by a cartoonist. These “puppets” without strings would later evolve into animated characters made of wood who would have names and star in their own films. When the Nazi regime installed itself in Germany, George and Zsoka left for Prague for a short time. Then it was on to Paris where they received an invitation from Sies Neuman, head of Philips Radio’s advertising, to move to Eindhoven, Noord-Brabant, Netherlands, and work there. Before long, he had his own studio and made commercials for Dutch, English, and American firms. It was in Eindhoven that George and American film maker, Dave Bader, invented a name for the three-dimensional cartoons that George was also now producing: “Puppetoons.” George made many films in Holland, including “The Ship of the Ether.” He changed his last name from Marczincsak to Pal, and, in 1937, George and Zsoka’s first son, David, was born. During the 1930s, George and Zsoka applied for an American emigration visa, only to be told each time that the small Hungarian quota was filled. Then, in 1939, the American consulate granted a visa for them and their young son to leave for New York. First, Pal made a solo trip to New York. Not long after arriving, Columbia University offered him a lectureship on the process of making stop-motion films. Coincidentally, Barney Baliban, the president of Paramount Pictures’ New York office, saw one of Pal’s Puppetoon films at a party. He was so impressed by it that he contacted Pal and offered him a contract to make them for Paramount, either in New York or at their animation studio in Florida. Pal returned to Holland and made arrangements for his family to leave Europe and move to America. Then, Frank Freeman, the President of Paramount Studios in Hollywood offered him a studio of his own and a staff of 25 film makers. The Pals arrived in New York early in 1940 and were soon settled in Beverly Hills, California. In 1941, George and Zsoka’s second son, Peter, was born. From 1941 to 1947, Pal created more than 40 Puppetoon films, and received a special Academy Award in 1943. His studio staffers included Willis H. O’Brien, Ray Harryhausen, Wah Chang, and Gene Warren. He was also close friends with animation producer, Walter Lantz, as well as film pioneer, Walt Disney. From 1948 to 1949, he began work on his first full-length motion pictures that combined live action with special photographic and sound effects. In the 1950s and 1960s, six of his films received Academy Awards. He worked with many gifted talents, including: director Byron Haskin; writers Robert A. Heinlein, Barré Lyndon, and David Duncan; cinematographers George Barnes, and Paul Vogel; visual-effects masters Gordon Jennings and his crew at Paramount, plus A. Arnold Gillespie, Wah Chang, and Gene Warren at MGM. Pal also worked with sound-effects wizards Gene Garvin, Harry Lindgren, Franklin Milton, and Van Allen James; art directors Albert Nozaki, Hal Pereira, Ernst Fegté, and William Ferrari; film editors Everett Douglas and George Tomasini; composers Leith Stevens and Russell Garcia; space artist Chesley Bonestell; many animation craftsmen, including his son, David Pal, (who brought the elves to life in “The Wonderful World of the Brothers Grimm”) and Don Sahlin who would later go on to design the original Muppet characters; plus countless actors and actresses, many of whom are remembered to this day. Throughout the 1970s, Pal worked on several film proposals, but only one was distributed. He passed away on May 2, 1980 while working on “The Voyage of the Berg” for AIP Filmways. It was never finished, but his other films endure.