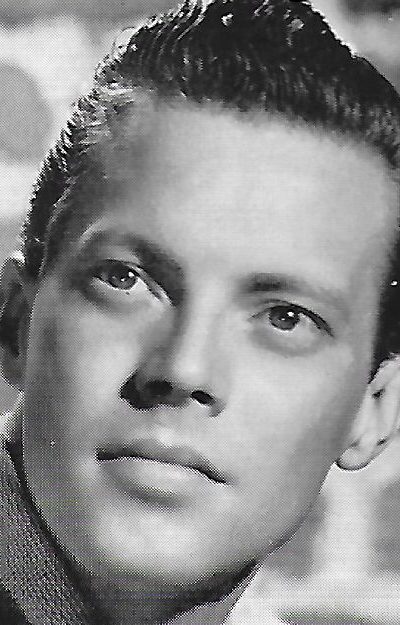 Arguably one of the best singers of the twentieth century, Dick Haymes was born in Argentina to a Scots/Irish father and Irish mother, but brought to the U.S. as an infant. Dick inherited his vocal gift from his mother who made ends meet during the Depression as a singer and voice teacher. A music gig in 1931 caught the eye of a local band leader and soon Dick was moving up, but it was slow-going. In 1939, while Dick was trying to pitch his songwriting talents to band leader Harry James, he ended up his featured vocalist, instead. During the war years Dick hooked up with the Benny Goodman and Tommy Dorsey orchestras before deciding to go solo. Nabbing his own radio program in addition to a Decca recording contract, Twentieth Century Fox soon expressed interest in his musical talents. Among his many film leads were State Fair (1945) opposite Jeanne Crain and Vivian Blaine, Diamond Horseshoe (1945) and The Shocking Miss Pilgrim (1947) both paired with Betty Grable, One Touch of Venus (1948) with Ava Gardner, and All Ashore (1953), a second string version of On the Town (1949), with Mickey Rooney and Ray McDonald as his shore-leave buddies. For such a pleasant and unassuming man, Dick’s personal life certainly was a shambles aggravated by alcoholism and financial debt. Five marriages came and went (including actresses Joanne Dru, Nora Eddington, Rita Hayworth, and Fran Jeffries) before his sixth one finally stuck. By the 1960s, his life was all but ruined. He managed to travel to Europe and picked up the remnants of his career. His reputation had not tarnished there, and he enjoyed some renewed popularity; he never regained, however, the foothold in the business that he once had. Dick died of lung cancer in 1980. Though not as well remembered as other crooners of his time (Frank Sinatra, Tony Martin, Vic Damone), and not a particularly charismatic performer on film, this rich baritone’s legacy IS his music. Some of Dick’s more popular recordings include “The More I See You,” “How Blue the Night,” “For You, For Me, Forever More,” “Speak Low,” and “Another Night Like This.”