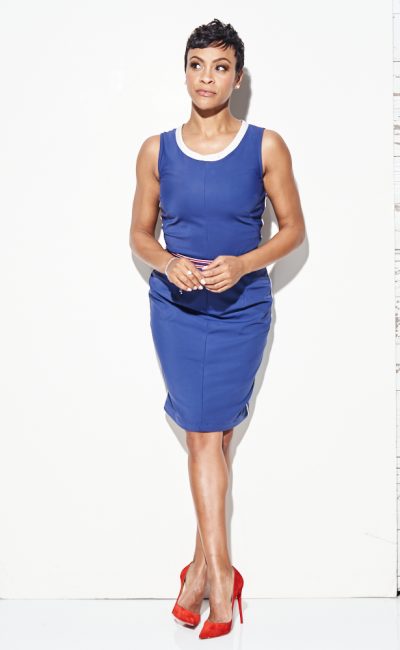 Actress Carly Hughes is a star of both stage and screen. She is best known for her work on Broadway and as Angela for four seasons on the ABC family comedy “American Housewife.” This past holiday season Carly stared in The Christmas Edition, a new holiday film for Lifetime, opposite Rob Mayes and Marie Osmond. In the film, Carly plays a journalist who gets the chance to run a newspaper in Alaska, jump starting both the paper’s profits and her budding romance with the former owner’s son. She also released her first EP of holiday classics titled ‘Mistletoe & Carly’. Originally from St. Louis, Missouri, Hughes grew up in Columbia, Maryland. Her talent was recognized in 2003 when she became a recipient of the prestigious Princess Grace Award for Acting and Excellence in the Arts. She received a Bachelor of Fine Arts in musical theatre before moving to New York City to pursue her theater aspirations. Hughes has appeared in eight Broadway shows, most recently starring as Velma Kelly in “Chicago,” the Leading Player in “Pippin” and Lucille/Shirley of the Shirelles in “Beautiful: The Carole King Musical.” She appeared on “The 2014 Tony® Awards,” “The Today Show” and “The View” to perform her song “Will You Love Me Tomorrow,” helping to win the 2015 GRAMMY® for Best Musical Theater Album. Her other Broadway credits include “The Book of Mormon,” “Ghost: The Musical,” “Ragtime,” “The 25th Annual Putnam County Spelling Bee” and “Dr. Seuss’ How the Grinch Stole Christmas.” Hughes has also starred at regional theaters across the country, and her voice can be heard in most of the songs in “Lucky Stiff,” the Ahrens & Flaherty movie musical. Hughes has guest starred in HBO’s “Curb Your Enthusiasm” and on the Netflix series “Insatiable” and in the Netflix film “Malibu Rescue: The Next Wave.” When she is not performing, Hughes enjoys cooking for friends and learning about wine. Carly has a successful Instagram series titled “Cooking with Carly.” Many days she can be found watching the Food Network, expanding her culinary expertise. Known to her friends as “Crafty Carly,” she spends time making handmade scarves and gift baskets. She also loves traveling to experience other cultures and hopes to take a trip to a new destination every year.