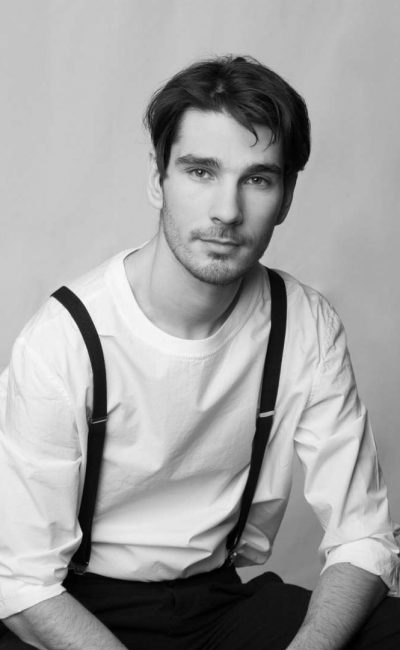 Anghel Damian was born on the 9th of August 1991, in a family of well-known Roman- ian filmmakers. The young Damian started his acting career at the age of 17, at first in theatre and independent short films. He got admitted at the National University of The- atrical and Cinematography Arts with a merit scholarship for the Acting Programme, and finished his studies with a perfect 10 (A+) average. While still in school, he was awarded best Actor Award at CinemaIubit International Film Festival for his roles in three different short films. After graduation, he landed his first major television role, play- ing the antagonist part for 70 episodes, in a well-known Romanian TV-Series -” Lost Angels”. He also got his debut for his first feature film with a secondary role in ” Rox- anne” directed by Vali Hotea, a film that premiered at the Locarno Film Festival in 2013. In the autumn of 2013, he won the Award for Best Young Comedy Actor at the National Gala for Young Talent “Gala Hop” 2013, a well-known Romanian Theatre Gala. In 2014 he was named one the 20 young European actors to watch at Subtitle Film Festival. He also got involved in Film and Theatre Production, as he produced two short films and co-produced numerous plays in the independent theatre. He began writing for film, completing first feature film script: Marona’s Fantastic Adventure ( Premiere: Festival Annecy 2019) As of December 2015, he was appointed Personal Adviser in Theatre Management for the Minister of Culture and served during the mandate of Vlad Alexandrescu and Corina Suteu until January 2017. In may 2017 he was hired as an actor at Bucharest Theatre of Comedy (Teatrul de Comedie) and landed the main part in the TV series ” Saturday Night Years” created by Nae Caranfil ( to be nationally televised in 2018) . Also, during the year 2018, he began his collaboration with the world renowned theatre director – Andrei Serban, being a central part in two of his Bucharest productions: Don John in Shakespeare’s Much Ado about Nothing and Treplev in Chekov’s Seagull He also di- rected his first short film “Michelangelo” that premiered in June 2018 at TIFF ( Transyl- vania International Film Festival) and won the Special Jury Prize. He became a grantee of the newly founded ” Lucian Pintilie ” fund ( in memoriam of the director) which en- courages art house cinema made by new directors and began working on his second short film – “Celed”. In 2019 he become the head-writer for the most successful Tv-series in Romania, “VLAD’ a modern adaption of “The Count of Monte Cristo”. In June 2019, his second short film “Celed” (Minion) premiered at Transilvania International Film Festival where it won the Special Jury Prize, and the film “Marona’s fantastic tale” based on his original script premiered at Annecy Film Festival where is was aquired by Gkids distribution for a North-American release.